Better No One Than the Wrong One

I’m a big romantic. For a guy, I love all the mushy-gushy stuff quite a bit. I’ve been known to write a love poem or two…dozen. And I have been in some really great relationships in my time. But currently I’m single. And that’s ok.

Our current culture has erected this god that you’ll see worshipped all the time in our popular movies, TV shows, magazine covers, and of course song lyrics. Romance or “true love” has become the pinnacle of existence. And without it millions of people are made to feel inadequate, somewhat empty, maybe even purposeless. What is life if you have no one to love romantically? 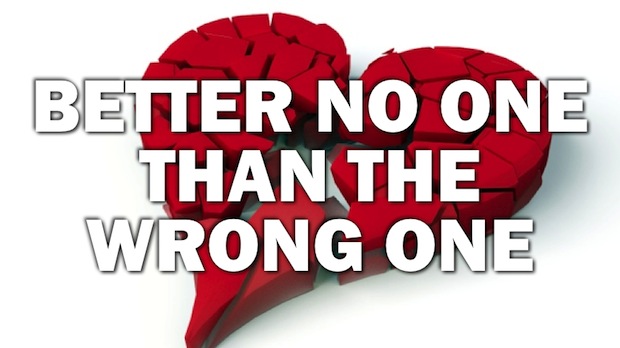 All of this reminds me of an Old Testament character who struggled relationally speaking. He was a man of strength and courage and had so much going for him. But despite whatever he had going for him, he had one big thing going against him: he felt hopelessly empty and alone without being needed and “loved” by a damsel in distress.

He felt strongest when his muscular arms held her gentle frame, when his bulging pectorals were used as a pillow, and when he could effortlessly lift her up with one arm. Samson was a shameless flirt. But he was soon to find that he was flirting with more than a deceptive Philistine beauty. He was flirting with his own demise as a warrior and leader.

There is a relationship truth that Samson was about to learn the very hard way: It’s better to be with no one than the wrong one.

Countless other people have learned this lesson over the course of history. I’ve met with many young men and women who convinced themselves that their relationship was a good one when it was clear they shouldn’t be together. But the thought of not being with someone secretly gnawed at their hearts and minds.

So they convinced themselves that he/she was good for them. Sooner or later it comes crashing down and they experience not only the pain of being “alone” but also the pain of heartbreak at having been with the wrong one. For Samson, this emotional lie that blinded him from seeing Delilah’s true colors ended up leading to him being literally blinded.

That’s why it’s important that we take a clear look at the romantic aspect of life. There is beauty in sharing life with someone. There is joy found in caring deeply for someone and being cared for deeply. There is immense wonder at joining someone in the pursuit of God’s purpose for both of your lives for better or worse.

There’s truth in the idea that love is worth being admired. However, you won’t find “naive,” “foolish,” “reckless,” or “blind” in the list of adjectives to describe love in 1 Corinthians 13. Love is sacrificial and takes risks, but I’ve seen far too many people willing to sacrifice their future and risk heartbreak, pregnancy, or even divorce all because they were more concerned about being with no one than being with the wrong one.

For me, I have had the pleasure of meeting many great ones along my relationship journey. Though I have yet to meet the right one, I’ve seen some of my great ones meet the right one for them and that gives me renewed hope that it’s worth being patient for. As momma always told us, “Good things are worth waiting for!”