Your Venting Doesn’t Seem To Be Working

Just today I was looking at Tweets from students I lovingly try to disciple and there was one overwhelmingly common thread: These students were all incredibly angry. Not just a bit upset. There were curse words aimed at life, aimed at people, aimed at the sky. Blame was being hurled, frustration was being spewed, and trash-talking was present too. It was too much to take in without commenting on. And so I like to think that this is my chance to write back in more than 140 characters to each of these students to ask an important question about their venting: “Is it working?” 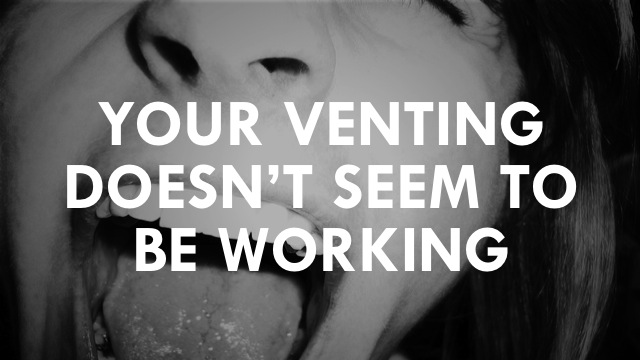 Let’s start off with a much larger perspective and back away from all the specific details for right now. Let’s not go to what your sister said or did or what happened at school that ticked you off. Let’s get to what you want from life. Do you want to be happy or sad? Do you want to feel content or grumpy? We’re going to have problems in life, all of us will. But would you like to have more of them or less? And would you like to grow from them so they happen less frequently or repeat them as often as possible?

Now I imagine that it seems like a waste of time to ask those questions. I mean, except for the incredibly dark student with heavy eye-liner who says that they want to be sad, feel grumpy, and doesn’t mind having problems, I think we all know what the answers should be. Should be. We should want to be happy, feel content, and learn from life’s problems so we experience them less. And this brings us to the problem with the way we handle life’s challenges so often…

The idea goes something like this: I’m ticked. So I’m going to get this off my chest, vent a little, and express my anger to the world around me.

In some sense, this makes us feel better. We feel we’ve expressed ourselves, something that’s important to pretty much all of us. Now it feels like people can at least suffer with us or that we’ve gotten it “off our chest” if nothing else. But there’s a problem with that. It doesn’t actually work.

If venting our anger helped make our life better then I wouldn’t see repeat offenders on Twitter or we wouldn’t have those people that we all know who are continually complaining to us about their lives. You know who I’m talking about? If venting solved problems there would inevitably be less of it instead of more. But it doesn’t seem to be going away, does it?

So why are you so angry? Why do the things you post just ooze with bitterness, resentment, hurt, frustration, anger, and dissatisfaction? You need to ask yourself that! I mean, is that the kind of person you want to be? Because it sure seems like that’s the kind of person you’re becoming, and those who love you certainly don’t want that for you! So why would you choose to let the junk of life define you. It certainly doesn’t have to.

So don’t let your problems win. You’re better than that. When you “get them off your chest” it’s like throwing a pile of cow manure in a fan. Sure, you’ve moved it, but now it’s all over the place. Take a look at the happiest, most content people in your life. Newsflash: It’s not because they don’t face a ton of crap in their life. It’s that they choose to deal with it differently. Rather than throwing it on the fan for everyone to get a piece of it, they use it to grow something in their life that they do want. Maybe patience, a strong will, love, or something else.

So deal with your problems. Give your concerns and worries to God. Talk one-on-one with a trusted friend who will speak life to you when you’re down. Get off Twitter and read the encouraging words of God found in the Bible. Make intentional choices to actually make your life better and less worthy of complaining about. Because, frankly, your venting doesn’t seem to be working at that.