The other day I had to have a difficult discussion. In fact, that probably is a bit of an understatement, because it even got to the point of affecting me physically as I wrestled with how to take care of something that had come to my attention. It was clear that I needed to step in as both a pastor as well as a loving Christian and deal with this situation.

This presents a pretty difficult dilemma for us believers to deal with. On one side of the issue we hear our world telling us that we have no room to say anything or we’re being judgmental. And then, of course, that’s all the church is to some people – a bunch of judgmental people looking at other’s faults and failures. 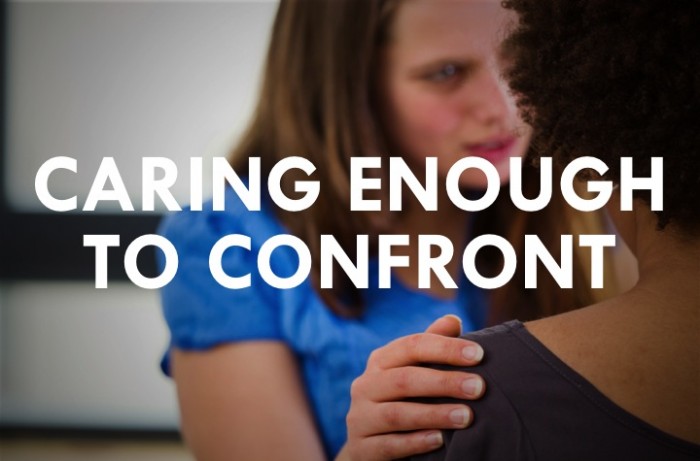 But to that side I say, “Hold on!” Let’s be careful that you’re not propagating the same kind of sin you’re pointing out in others. If you say that there is really no room for anyone to correct anyone else without being judgmental then you’ve already cast your judgment. And you’re wrong, too. Yes, I said it.

Without confrontation you can’t call it love. It’s cowardly people-pleasing. You’re just telling people what they want to hear without ever dealing with the reality that we’re all going to mess up and at times need someone to point it out and help us to repair the error. Love is putting an arm around someone and showing them what they did wrong and how it was wrong. And love is recognizing that you’re not perfect, accepting correction, and changing your ways in light of that.

2 Timothy 4:2 says “Preach the word; be prepared in season and out of season; correct, rebuke, and encourage – with great patience and careful instruction.” If you love people it’s biblical that you sometimes approach the dark recesses of their actions and behaviors with the light of truth. We should just be ready to do this with great patience and careful instruction. Instruction that perhaps even comes from when we’ve been confronted!