When You Want to Kill Your Teen, Read This

Parents, do you remember what it was like? When you watched in wonder as he grabbed ahold of that edge of the couch and with incredible effort lifted himself up? Held up by those wobbly and chubby little legs, he swayed for a bit and then started bouncing up and down. Suddenly he took his one hand off the couch and turned. The world looked so different from up here. There were now new opportunities to be had. Then you watched in wonder as he took one foot, lifted it up off the ground, and then moved it forward as it came down.

That first step was followed by another one and then another one and then gravity caught on to what was transpiring and decided it was time for the young adventurer to be brought back down. With a flop he hit the ground, but with confidence that he had accomplished something significant. His first clue was probably how excited you were! Just look at your face! Your enthusiastic smile and cheers were like rocket fuel behind this momentous “first.” 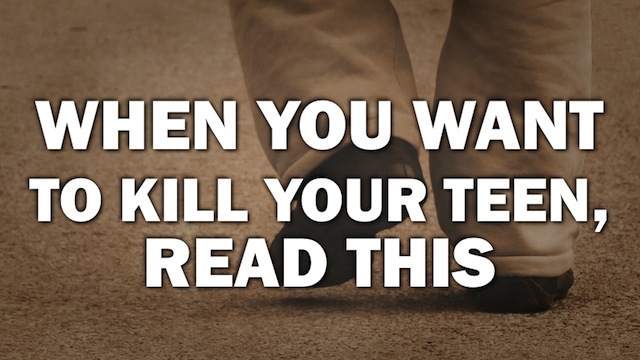 A lot of time has passed since then. Steps soon turned into walking. Walking then turned into running. And now, your teenage child seems to be running all over the place. And sometimes, if you were to be totally honest, you’re not sure where they’re running.

It’s no secret that the teenage years can be one of tumultuous development, wild temper tantrums, and a fair amount of screaming that could easily remind you of those terrible 2’s you experienced more than a decade earlier.

I’ve seen how exhausting and demoralizing it can be for parents. This came out of nowhere, it seems. She was so sweet before. He was so innocent and kind. What’s going on? What happened?

They’re back to taking steps. These ones aren’t quite as obvious as the other ones in your first house’s living room. These probably aren’t getting the smiles and cheers from the spectators. But these are still steps. They’re taking steps to figure out their identity as an individual, as a unique person. Hormones are triggering new levels of feeling. Cognitively they’re growing quickly and finding that they know a lot more than they did just years earlier (and yet still don’t quite know enough to know how little they know!).

Everywhere they look there is change. Like the infant who, upon standing, sees a whole new world for the first time, here are our teens.

And like those infants, this new perspective will lead to stumbling and falling. They won’t become instant experts on walking through it. They’ll go for a while and then fall down. Walk a little further and then fall down. There may be some cheers but there will also be tears along the way.

If you find yourself in the midst of this kind of situation right now I simply want to encourage you. You’re not crazy. This isn’t just your child. Nor is this the end of the world. And I’d like to offer you a few quick thoughts of encouragement:

Remind yourself that we’re all in the process of maturing.

Just like it’s a new world for your teen, realize it’s a new time for you. This is likely new territory you’ve never personally set foot in before. You’re not expected to be perfect. You’re not a bad parent if you find this incredibly difficult.

Don’t lose those eyes that can see an unforeseen future at a time when that kind of hope is so important!

Lovingly communicate your expectations to your child.

“I’m sorry, but you won’t talk to your mother like that.” “I don’t expect you to agree with this decision, and we can talk about it, but this is still a decision I’m responsible to make for you.” “I’d like to talk with you about what happened last night. And I promise to listen to everything you have to say about it without interrupting you. After that I expect you can let me have the same respect in telling you what I’m seeing.”

The complaint I hear a lot from teens is that they don’t know what their parents want from them, “gosh!” Now I don’t pretend to imagine this means parents haven’t told their kids what they expect. I just think it goes to show how clearly and repeatedly these things need to be said.

And when you speak, speak life into your child. Let them hear about the hope and belief you have in the great future that awaits them. Speak of their potential and the good they’re doing. Cheer on the steps and not just speak up when they fall. Your patient anticipation and clear depiction of your child’s future will help lead them into the next stage of it.

Please don’t give up. It’s terribly difficult business raising a godly teen in this day and age. No one is expecting this to be a walk in the park for you. But we’d sure like if you would still take the walk even if it’s through the dump. You’ve been given the unique privilege of shaping the future of the world we live in through your child.

This is the most important job you will ever have. Give it your best effort and you’ll likely get one of the best paychecks you could ever get: grown, godly, responsible adults you can proudly call yours.