All Show And No Go

This here is for those dreamers out there. If you’re one, you’ll understand this challenge. One of the biggest struggles I have is that, as a dreamer, I have a much easier time coming up with big ideas than I do in implementing and following through on them.

Visionary folks tend to struggle with how to make that vision fully come to reality. For a long time I thought that was just how it was going to be, and then I realized there were things I could do to keep my visionary spirit but actually be a person who follows through too!

This reminds me of an amazing sight I took in a couple weeks ago while on vacation in North Carolina. It’s called Fort Macon State Park and it’s home to a fort of over nine million bricks that were placed on top of each other way back before the war of 1812. That’s when the fort first saw action. 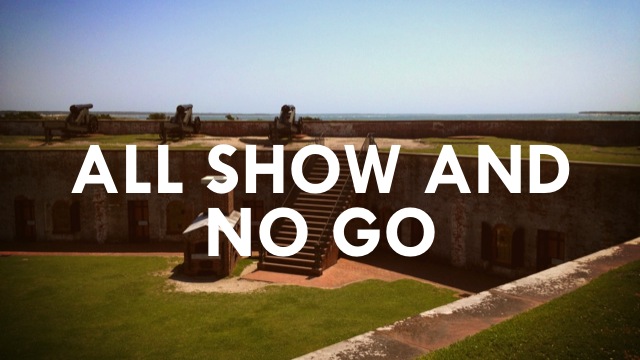 As years passed, it was used in the Civil War and even in World War 2, as well. The location is rich with history of battles fought, ships sank, and enemies kept at bay. The cannons were not to be reckoned with!

But now things have changed and those cannons that you see in the picture are just for show. They look great but they can’t really do much of anything.

This makes me think of what it’s like when we are able to come up with grand ideas but don’t do the work to see them actually come about. People may look in wonder at what we’ve created with our ideas, but there’s no real punch. At times I know I’ve been all show and no go!

So here are a few things I’ve learned along the way to let that not be the case. Here are ways to activate your arsenal of great ideas so they can become reality:

Whether it’s a “Notes” page on your phone or a physical pad of paper, it helps to have a place to jot down those sudden ideas that randomly come to you. When you write them down you can go back to them later and work them out.

Once you’ve got a brilliant idea, one that deserves getting its fair shot, then you need to break it down. You are here. It is there. How do you get from here to there? What are the different steps to get there? Personally I think it helps to break it down a lot to every needed action, and I’ll explain why in a bit.

Once you know the different things you need to do to get your big idea to happen then it’s time to create a map. Usually this tends to be a matter of setting dates and goals. “I’m going to get a done by July 26th so that I can be on track to get b done by the end of August” and so on.

If your idea is really good, (and it is, isn’t it?) then it’s probably going to be more than what just one person can do. This means you need to recruit some people who can appreciate and probably benefit in some way from this idea being accomplished. Chances are you can find some people whose passions and skills match with places on the map you’ve created that you’d just as soon not go to.

5.  Celebrate every victory along the way.

As you check off items from that break down you’re getting somewhere. You’re making progress. And if you wait till you’re staring at the finished project to do any celebrating, then I think you’re doing yourself a disservice. Allow yourself to celebrate milestones along the way. They prove that you’re not just for show but that you can go too!

6.  Determine a compelling, excuse-demolishing “why.”

There will come times in the life of any good idea when it just seems to be pointless to go on. It seems obvious that it would make sense to nearly anyone to just quit. But it may not be a good idea to quit. It actually may be incredibly important that you go on. If you’re going to do that, then you need to have a bullet-proof answer for “why” your idea should happen. The stronger your reason for why you should keep pushing on, the more likely you will be to push past whatever tries to stop you along the way.

Dreamers get a bad rap sometimes. Some think we’re all talk. And unfortunately, some of us are. But with the right ammo we can fire away great ideas and actually seem them land too, if we’re willing to do a little work to get things going.