This term is not an original that I made up. Some smart psychologist or something coined the phrase in referring to the culture we live in, particularly the youth culture. And I think that he or she got it pretty dead on.

You know what vultures do. They find something that’s sick or dying, something hurt, and they prey on it and feed on it and finish it off. It’s pretty gruesome and intense. But then so is the level of bullying and verbal bashing we see in youth culture today. Vulture culture — it unfortunately fits.

Maybe you know someone who has been made fun of on facebook. Maybe someone’s said something hurtful to you under the anonymousness of formspring. Maybe you’ve been made fun of by people at school. Maybe your brother or sister consistently berate you and make you feel worthless. This vulture culture is scary in how fierce and persistent it can be. It really seems like any time I go on facebook anymore I can find someone being picked on (even if “in joking”) in less than 10 minutes of meandering around.

And so what does this tell us? Is this just people joking around? Is this a matter of one or two people out there having real attitude problems and being the trouble makers? Or is it something that we all need to deal with because the end results can be shockingly tragic? 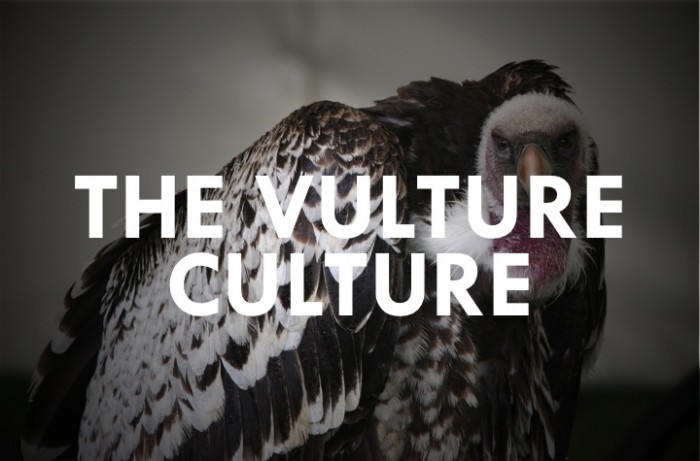 It should sadden us to hear that there are people ending their lives, giving away parts of their hearts, cutting themselves, bullying other people, or other serious reactions to this kind of stuff — even if it isn’t in our school or even state. This is a reality that WILL affect you and touch you and your friends and we MUST do something about it. There’s no question that cyber bullying and people being absolutely rude beyond belief is on the rise around us. But what are we doing about it? What can we do about it?

So as the vultures of rude, obnoxious, and angry people circle around, let us be the ones who come to the rescue bringing help and healing to those who have been hurt and keeping the vultures away. Then maybe we can see the culture begin to shift the way we know it needs to.