Why You Stink at Reading the Bible Regularly

Honest confession time, most of us Christians don’t read the Bible like we ought to. Maybe we don’t read it enough as we feel we should, or maybe it’s that we just don’t seem to be having the “aha” moments that some preacher guy seems to always be having when he reads it.

Plain and simple, some of us just seem to stink at reading the Bible regularly. So I wanted to take a bit of time and come up with why it is that we have such a problem with something that we probably think is pretty important. Why is it that we can want to read the Bible regularly but then sometimes find that we’re not doing too good at that? 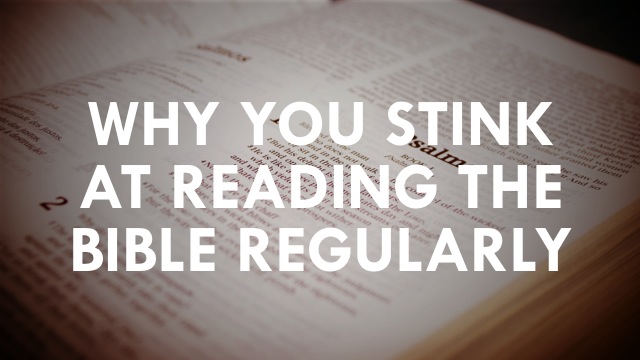 Well I’ve come up with 6 reasons that I think are fairly common. You may even relate to one or two in your experience.

Right next to making the bed, doing the laundry, and washing dishes is where Bible reading sits with some of us. No, no, we wouldn’t actually say that it seems like a chore, but in a sense it can sometimes feel like it. But reading the Word isn’t supposed to be some thing we check off a list of things to do in the day. The idea is that we’ve been given words from the very God who created us and knows the plans He has for us. Reading the Bible is our way of exploring that. It’s our way of digging into narrative, law, poetry, prophecy, and gospel, and finding truths for our lives!

2.  You read it like Russian Roulette. Instead, read it with its natural flow.

Another common problem I find people have is in knowing what to read. So the solution is to flip open the Bible and see what pops up. It’s like Russian Roulette, and though it’s not going to produce exactly those same results, it’s not entirely good either. The reason I think it’s better to read through an entire book is because that’s how it was originally written. Think about it. Paul wrote those New Testament letters in their entirety to a specific group of people. It doesn’t make much sense to chop up a letter. So you’ll find the Bible makes a lot more sense when read in its intended flow.

3.  You read it in a vacuum. Instead, read it in context of history and your life.

No, not a literal vacuum. But the idea is that we sometimes read the Bible as though it’s some sterile ancient book rather than the living word of God (Hebrews 4:12). I would encourage you that if you sometimes find reading the Bible to be difficult to get a study Bible and read up on the context. It’s a game-changer so often in my times of reading the Word. And then also take time to see how what you’re reading speaks to your life. These stories and instructions aren’t just for Abraham and Joseph, they’re for you and me!

4.  You read it once. Instead, read it a couple times over.

If it doesn’t strike you as interesting the first time, read it again. And then again. And even if it does seem interesting, read it again. And then again. It’s easy for us to read something and miss parts. And even beyond that, truths can become embedded into our minds and hearts when we let them sink in a bit. It’s like letting the Scripture marinate a bit on your life when you reread a passage.

Another common problem we sometimes have is that we’ll take the time to read our Bibles when we’re either tired or distracted. So for some of you that means morning times aren’t your best because that’s when you’re most distracted by what you need to do during the day. And some of us can’t do at night because we’ll get two words in and be fighting against Z’s. So figure out what time of the day you’re at your best and then give that to God in reading His Word. Doing this helps to make sure that you’re actually getting something when you’re reading rather than just doing it.

6.  You read it with the wrong expectations. Instead, read it for what it is.

Sometimes we stink at reading the Bible regularly because we feel it’s not working. We’re not getting the goosebumps we once had or have only heard about. We’re not finding it instantly inspirational. It just seems to not be working. This actually is just showing that we’ve come to the table expecting the wrong thing. We shouldn’t be looking for a show, we should be looking for dinner. As much as it’s great when we get the “aha” moments, they’re not the main objective. The purpose of reading the Bible is to hide God’s Word in our hearts so we’re prepared to live for Him throughout the day. Realizing that will free us up to eat what we’re given (even if it seems like brussel sprouts!) because we know that it’s ultimately giving us nourishment that we so desperately need!

The Bible is your best source of hearing from God. I challenge you to take full advantage of such a gift!