Why the Boston Bombing Happened

As the news was breaking yesterday about the bombings in the Boston marathon I happened to be with some of the great people I work with. We all were discussing it, looking it up, stopping to pray, looking for more information. Like you, I’m sure, we wanted to know what had happened.

But among all the questions that were racing through our minds as we followed the story, there was one that particularly stood out. It’s the one that I imagine you’ve wondered too. In fact, it’s the question that pretty much all of America seems to be asking in the wake of this tragedy just like we do in all major tragedies like this: Why? 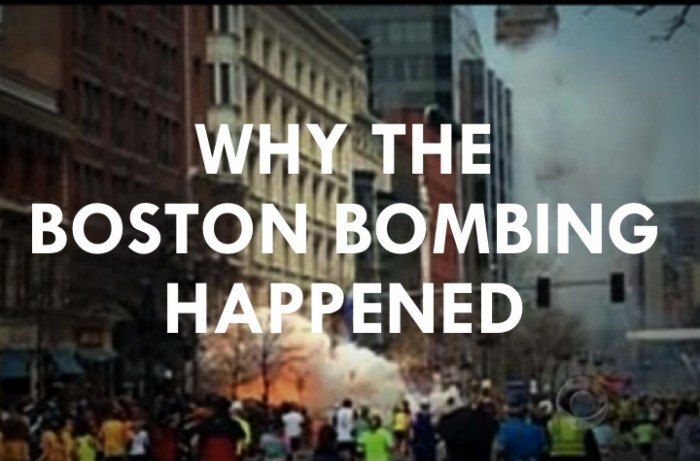 Senseless catastrophes have us searching for sense, nonetheless. And as we search through the rubble we’re sure to find different people groups picking up different pieces and highlighting them. We’re seeing this still in the aftermath of the Sandy Hook shooting.

We need explanations. We need to make sense of what we’re seeing. We need to know why someone would choose to commit such cruelty, to perpetrate such evil. And that actually exposes exactly what it is we’re dealing with. Evil.

It entered the world through the abuse of freewill in a garden long long ago. It has been behind every abuse, every hurt, every divorce, every lie, every bombing, every murder, every rape, every dark and sinister thing whether “big” or “small” in our eyes. It’s the driving force behind our pains and the pains that we see and hear about around us.

Because we live in a broken world. People have chosen to ignore God and so God has given them over to their debased minds that just think up new ways to perpetrate evil. We must realize that there are people in our world who, much like the Joker in “The Dark Knight,” simply want to see the world burn. They enjoy seeing brokenness and disaster.

This is a far more complex question than we have the ability to tackle here. But this is absolutely a fair and important question to ask! Why would an all-powerful and loving God allow this to happen?

Thank God for grace that has allowed us to have freedom from our own evil, our own sins. Jesus paid for them on the cross so we don’t have to bear them anymore.

And we’ve been given the gift of being able to be God’s hands and feet on this earth making things right, healing the hurting, mending the wounds of the broken, being peacemakers, affronting evil at every turn. We get to do that!

And lastly, as we reflect on all of this and ask “So what then?” we look ahead to a day when our tears will be wiped away, evil will be eternally damned and separated from good, and we’ll be forever with our God. He warned us that we would have issues like the one that happened yesterday. That we would have trials, troubles, and tribulation in this broken world. But He also said this:

“Take heart; I have overcome the world!”