The Exact Amount of Time It Takes To Accomplish Something Great

Last month I published and released my first book. It’s a lifelong dream come true! People have been so supportive and encouraging throughout the process. But one thing began standing out to me in my many conversations about the book. It felt like nearly every conversation would eventually involve them asking me this question: “So how long did it take to write it?” 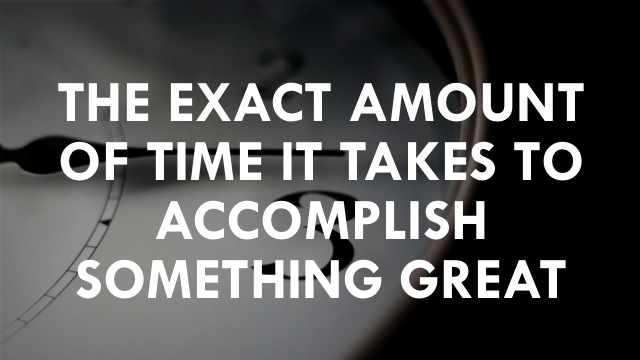 Then fast forward to just this past week when I had the privilege of going to my sister-in-law’s senior art show for Pennsylvania College of Art & Design. I overheard a number of the 2,000 visitors at the exhibit asking the artists a recurring question about their artwork: “So how long did it take to create that?”

It struck me as odd that such a similar question would be asked. I mean, were the people passing notes on what one question they all needed to ask?! I think not. In fact, I find it absolutely intriguing that this seems to be such a common question, don’t you?

The reason behind all this noseyness is because deep down we’d all like to accomplish something great. I think we’d be honored to have our name in the paper for doing something noteworthy. We’d like to do something that has people applauding our efforts. We’d wish to have something to be remembered by when we do eventually leave this life. So we just want to know how.

But then we’re back to the question, because it’s not exactly “How?” that we’re asking. The unscripted question of so many tends to be “How long?” So why “How long?” I think I know.

I think it’s because we expect that doing something of significance takes an immense amount of time. We imagine it must have taken an eternity to write a book, or to craft intricate artwork, or to produce an album, or whatever else may seem like a great accomplishment (because there could be many more examples!). Certainly the time element is important and pretty significant in getting things done, but not nearly in the way we think.

When it comes down to it, the exact amount of time that is needed to accomplish something great is a bit more than is convenient and a bit more than what accomplishes the status quo. I know that it may seem disappointing that I couldn’t give you exact hours and minutes, but greatness is far too complex to be that easily figured out. But at the same time, it’s also simple enough to say that if you want to accomplish something great in your life you probably can! It’ll just take more time than will be easily available. And it’ll take more time than it takes to produce what is mediocre.

Enough already! It’ll never be about finding the time, but about making the time! Every great success story in all of history had the same 24-hour days as those who wasted dreams and aspirations on average daily living. If you wish to take some of the goals you have and see them come to fruition. If you want to see the dreams you’ve had become reality, then you’re going to have to choose to spend your time that you’d normally give to other things on the dream. It’s sacrifice, sure. But it’ll pay off if you’re willing to risk it.

I’d be willing to bet you’ve got at least one good, noteworthy, front-page-deserving accomplishment in you. Regardless of your insecurities, your inadequacies, your inabilities, you’ve got what it takes to make something big happen. Are you willing to invest the time it will take to make it happen? Are you willing to go above and beyond? Can we soon have people asking you, in simple wonder, “Wow, how long did that take you?!”