Pastors don’t generally like being told what to do. So that may very well render what I’m about to say as useless. Nevertheless, for the sake of the church it needs to be said: Pastors, it’s time you took a long break from constantly begging and pleading and guilting your people into inviting their friends to come to your church.

There I said it. And I believe it’s something a number of church attendees would secretly love to say to their leaders. 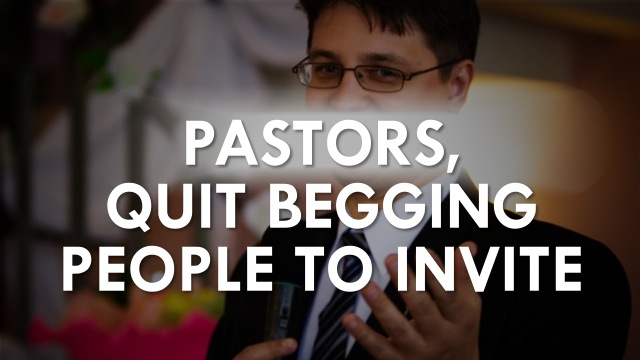 I’ve seen countless youth pastors and senior pastors over the years do it. They put out this subtly guilting call to their people to care about their faith enough to invite someone to come with them next week. Yet, so often in those places where it’s harped on often, you don’t see much growth. You don’t see people inviting people much. My pastor friends, it would seem as though it’s apparently not working!

Because that’s not how it works. Think about when Jesus met the woman at the well. He met her where she was at and then brought her a message that could and did radically change her life. Then what happened next? She immediately went out telling anyone she could about going to see Him.

Jesus didn’t have to prod her to find just one friend she could talk to this next week.

Sure, there may be times that people need a little encouragement or better resources to tell someone. But that’s not their greatest need. They need a church where they feel an incredible sense of belonging, where they’re challenged, where they grow, and where they regularly see God move and change lives.

When your church services and environment are not at the level that someone would feel comfortable openly inviting new people to and you continue to beg them to anyway you are doing something incredibly counterproductive to your cause. What happens is that people get trained to say “no” in their minds every time they hear the plea from the pulpit or social media outlet. And then the more it’s asked of them, the more they say “no,” and the more they’re being trained to do so.

So what if you concentrated more on creating services as well as a general community that people were excited to go to and be a part of? What if it naturally just made sense for people to invite their friends, coworkers, and neighbors because they want others to experience what they’re experiencing? Pastors, nurturing this kind of atmosphere may not initially save you time and energy, but it will save you wasted words in the long run!

DISCLAIMER: Just because some would wonder or more likely just assume, let me say that this situation does NOT currently find itself as a reality at my current church and with my current pastor. That very fact allows me the liberty to speak openly and honestly about these thoughts and concerns.