One of the Most Foolish Things I’ve Done

It’s April Fools Day. A day where we celebrate making fools of other people by playing practical jokes, telling little lies, and other forms of trickery. It can be pretty amusing messing around with these family and friends and making them look a bit foolish. No doubt about that! But it’s not nearly as fun when, in real life, we do something that makes ourselves look like the fool.

I’ve decided to be pretty open and honest and a bit vulnerable today as I write. I felt compelled to share about one of the most foolish things I’ve ever done. And now years later I have the advantage of hindsight to see what exactly I was doing that was so completely wrong. 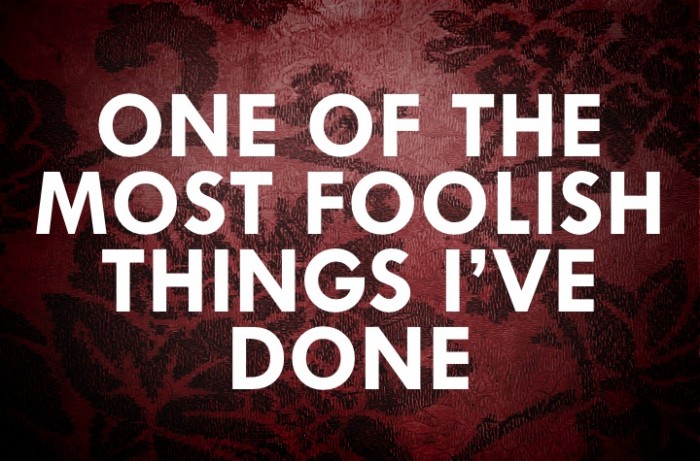 For four and a half years I dated this gal from Texas. And before you start wondering if I’m going to say that dating her was foolish or your mind wanders anywhere else, let me just get right to it: One of the most foolish things I’ve ever done was to allow a relationship with another person to become so important that it became an idol in my life, removing God from His rightful position.

We were in love, and it was my first time experiencing that. Since I tend to be a pretty much all-or-nothing kind of guy, I was willing to invest a lot of time, money, and energy into the relationship. I cared about her deeply and she became nearly all I could think about. After a while, that became more and more true.

She really was consuming my every thought. Taught by a world that romanticizes romance, I tended to believe that this was good. I was living out the pop songs where this girl is my world.

Now, I wouldn’t have said that she had become an idol in my life or that she was competing with God. I didn’t quite see that at the time. But as those cheesy pop songs also say, “You never know what you got until it’s gone.” And I didn’t realize what I had created until it was gone.

When we broke up I was devastated. Not just really, really sad. Devastated. The reason I’m stressing this point is because this is what eventually led me to understand the position that my romantic relationship had taken in my life. God had been pushed to a secondary spot and He was not enough to sustain me without her. I was being entirely foolish because ultimately God was supposed to stay in the center of my life since He created it, saved it, and sustained it. And yet a temporary relationship had taken that spot.

Too often I see other people, much like myself, allowing other things to creep in to the throne room of their life and try to steal the chair from the God they claim to serve. It’s a challenge at times to spot these things because they may not be evil or wrong things at all. They may simply be good relationships or good pursuits that have become too central to our focus, passion, and time.

Jesus even warned about family members becoming like this (Matt. 10:37). I can’t imagine how difficult it must be for a husband and wife to make sure that they don’t allow their spouse to become more focal than their relationship with God! But whether it’s a person or a pursuit, we can be tempted to be fools and place these temporal things in the place in our hearts and lives that belongs only for our eternal God. From my personal experience I just say: Beware. Watch out for this. Because idols always do eventually come crashing down and then you are left to pick up the pieces.

But delight yourself in the Lord and He’ll give you the desires of your heart! (Psalm 37:4)