If You Can Get Angry, You Can Change the World

For Moses it was the injustice being served to the Hebrews at the hands of the Egyptians. For Abraham Lincoln it was the slavery issue in early America. For David it was the insolence of a man named Goliath and the Philistine people he represented. For Martin Luther King Jr it was the racial inequality in an otherwise progressive society. For Mother Teresa it was the plight of the impoverished in Calcutta. For Jesus it was the certain demise of a people He loved.

For these and countless others throughout the course of history, anger has actually been a key ingredient in motivating them to change that course of history. So as much as anger can be a destructive force at times, it can also be the reason for massive restoration. It’s all about what you do with your anger. As an emotion it is neither inherently good or evil, though we sometimes tend to assume it is the latter. It’s just like any tool, use it correctly and it can be used for good or use it incorrectly and you may cause a lot of pain. 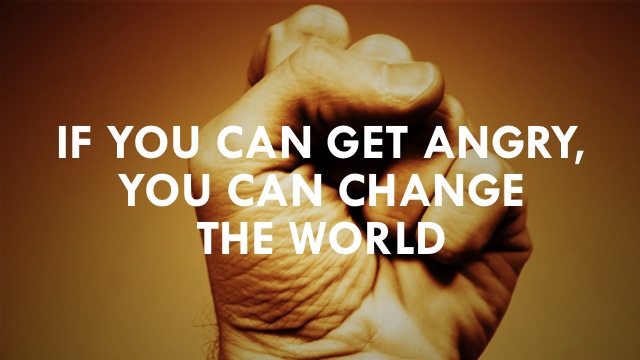 What’s most intriguing to me is that it seems almost like a personal, God-given gift at times. I mean, certain things tend to eat at us more than it does other people. There were other people who probably thought that Goliath was a problem but no one got as ticked off as David. So it may be that what ticks you off is unique to you so that you can be the one to do something about it!

So let’s look at 3 steps to using your anger to change the world:

We need to discover what it is that ticks us off. No, this is probably not going to be the full list which would include traffic, dentist visits, and people talking with their mouth full. It needs to be the issue that really seems to just bother you. Perhaps you’ll even find that when you talk about it with others they don’t seem to “get it” quite like you do. That’s a pretty good sign that you may have found an issue you’re meant to do something about.

Allow me to also clarify a really important part of this that we need to realize here, too. I’m intentionally repeating that our anger is towards an issue because that’s where it actually should be. While we may be tempted to let it be directed towards individual people, it’s never really about individual people. Small people deal with people. Big people deal with issues. If what you’re meant to change is worth changing, then I assure you it’s bigger than a person or two. So what is this thing that irks you?

2.  Paint a mental picture of solution

Moses could picture a freed Israelite people. Lincoln could imagine a slaveless America. David could envision a defeated enemy. MLK Jr. could dream of an unsegregated United States. Mother Teresa could conceive of a cared for Calcutta. And Jesus could, unlike any other dreamer in history, see a picture of a rescued humanity from the grips of sin.

It’s important that you paint a vivid picture of what it would look like for your issue to be resolved because that serves as motivation for yourself and inspiration for others who will join you. We need to see, in a sense, where we’re going. Though it may just seem like wishful thinking, when you’re ticked off a little wishful thinking is good!

Now it’s time to get started. Once you can picture the landscape you’d like to see, it’s time to get out the brush and start painting it stroke by stroke. Most significant change does not happen quickly or in a matter of a few big moments. It’s constructed over time and piece-by-piece as we build the better world we believe is possible.

For me at this point right now, I’m ticked off that teens in the Bowie area are especially prone to living life all for themselves in the hopeless pursuit of happiness outside of Jesus. I imagine a movement that would cause them to see the much larger plan that Jesus has for them and for them to turn their lives over into His hands en masse. So I continue to meet them where they are at, speak truth to them whenever I can, and be there for them in their needs when possible.

I tell you this only so you can see how this personally works out for me, and so that you can see that it doesn’t always need to be something historic. Whatever it is that seems to really get under your skin, prayerfully consider if it isn’t that way because God wants YOU to do something about it!